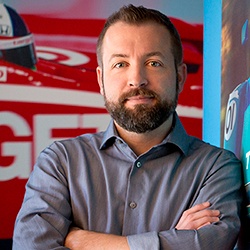 What does a Chemical Engineer from Purdue know about digital marketing? Turns out, plenty! Kevin Hofer has been working with Chuck Tate on developing websites since the beginning. Both worked at the same chemical company when it seemed that their careers were going to take a very different direction.

But just as Chuck has a passion for racing, Kevin had an extreme interest in web technology and how that can be leveraged to help businesses. While living in Chicago, Kevin read every book he could get his hands on related to web design and development.

In 2002, Kevin received the fateful call from Chuck Tate asking him to join Digital Momentum (which, at that time, was named RACERSITES). Kevin began working with Chuck remotely before making the move south to Charlotte to join the team.

Kevin is the team lead for the majority of the clients and devotes his time to building client relationships and building a model of interactive solutions that are purpose built for their needs.

The will to win is not nearly as important as the will to prepare to win."  - Fielding H. Yost

Get to Know Kevin

← Back to Leadership page